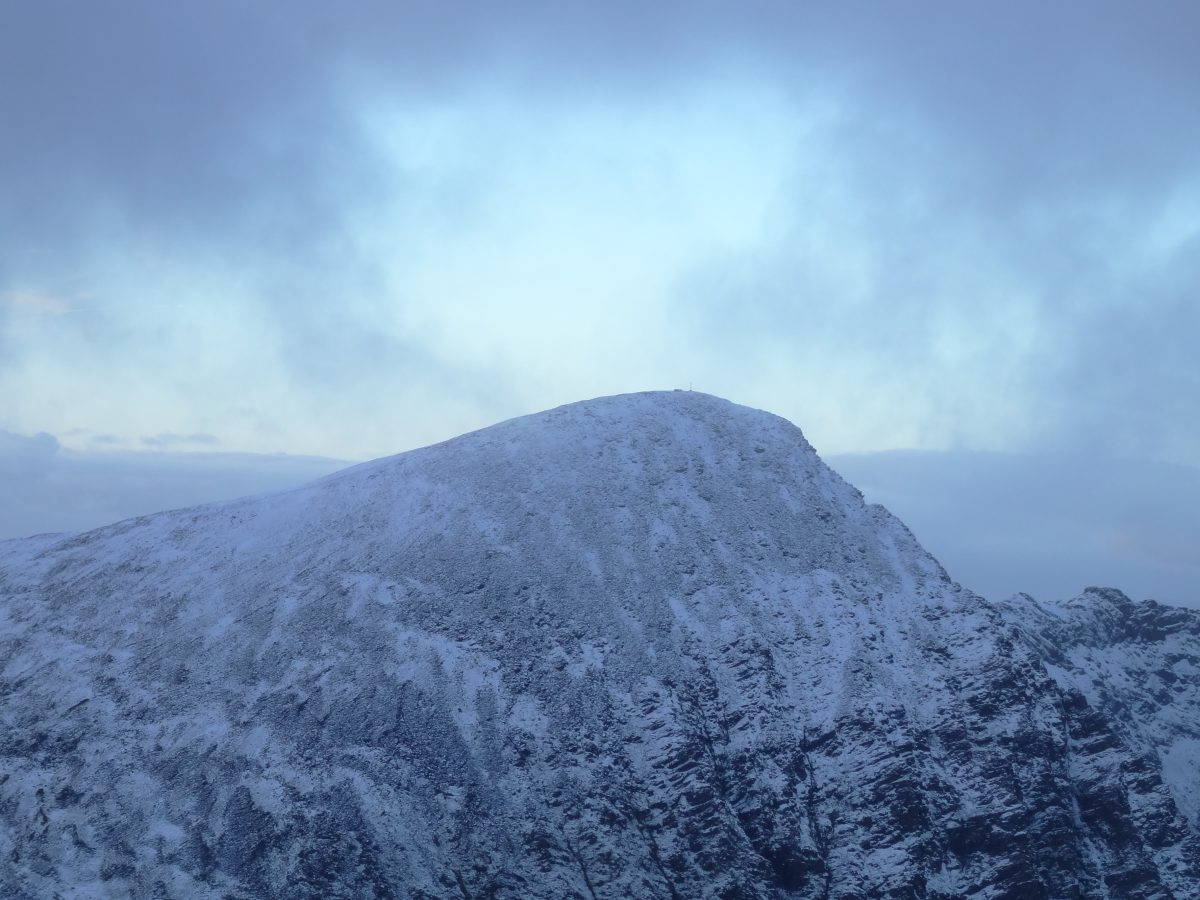 It was with much anticipation and excitement I headed on the long drive to county Kerry on the last weekend of January to meet up with a couple of friends, and to do some climbing and training among the Mcgillycuddy Reeks, the highest mountains in the country. Our plan was kind of dynamic and nothing was

written in stone. I only really knew 1 out of the other two team mates, and the weather as usual, in places as rugged as we were heading to is always boss. My GPS went on the fritz heading down so the 4 hour 30 min drive ended up taking me closer to 6 hours. I’m sure there’s a lesson there somewhere too, that I thought I’d learned before, but I made it. Be warned, Cronins Yard is surrounded by a rabbit warren of back roads and lane ways that all look the same, especially on a dark rainy night.

Con arrived shortly after and it was good to catch up for a while after settling in. We looked at the maps and discussed some possible plans after getting the weather forecast, winds from the S/SW, snow, -2 with a wind chill factor if you were in it of -8, and we were possibly going to camp the following night. Sounded like fun. But sure we’d get a little sleep and see what tomorrow brought. The plan was to be gone early to set up camp and make the most of our days’ climbing. Paulina would be joining us in the morning as she couldn’t get away early enough on the Fri from work.

We rose early and readied ourselves and again discussed the plan. It had been cold the previous night, 1 of us had a suitable sleeping bag, the other had a suitable tent, but we thought, well we still could chance it, but we also knew we wanted to try do the big gun and probably Carrauntoothil, so we questioned also the practicalities of carrying a full pack to either of these places with the pending weather forecast, and the deadlines imposed on us by our return to civilization. Our third party member was a little late arriving as she’d a car that had to be defrosted and a 90 min drive over icy roads to join us, so we kinda agreed, none of us were that pushed to camp.

After our third arrived we again had to discuss the plans and objectives so we were all agreed and reading form the same sheet so to speak, re-organize some kit, then all ready to go when a flask broke and the contents poured out, soaking it’s owner and all their dry stuff. I love it when a plan comes together. But keep a cool head, we could fix it. Dry out the wet stuff and grab another flask of hot drink. It would have been a lot worse and potentially life threatening had it happened higher up the mountain in these conditions. So at 11.30 we headed off in high spirits.

Descriptions under the pics describe journey so far, and the going was getting tougher, grass and bog turning to scree, scree turning to boulders and all with a generous coating of snow and ice, a quick check of the watch and our travelling speed, available daylight so we decided on a slight
shortcut and instead of bagging the 1st spot height we’d just go on up to the middle of the saddle, and work it from there, but the terrain was definitely getting more interesting, and challenging. We checked our maps again, at length and decided to continue. But it appears we’d walked ourselves into a trap. Maybe in summer conditions this 1st ridge is fine, maybe in winter it is too, but we didn’t like it this day without harness and ropes, so it was time for tea. We’d descend a bit and traverse over at a lower altitude to the next section and the Big Gun.

Traversing was tricky across these frozen rocks, but taking our time, also looking at the scenery and getting some pics, chatting about Piazza and St Patricks Cabbage, listening to the ravens and watching them tumble in the blue sky, it was a good day to be alive.

Finally we were there, the start of the Big Gun, and it looked doable, and maybe it was a slight cheat, but a couple of guys went over it before us so

all we had to do was follow their footsteps, it still looked daunting and would command our full attention and respect. There’s a lot of exposure on both sides but in parts you can skirt to either this or the other side, in other parts it’s better to just go right over the top, but using hand and foot hold, and holding our nerve, carefully we managed to figure out the trickiest step, then it was a walk in the park for the next hour or so, and what a park it is. Across the skyline of the reeks we went spot height to spot height, col to col with the spin-drift keeping us company. In the fresh clean air, stopping now and then to get some snaps, or check out interesting feature we’d not noticed before in the heavenly light this day. It truly was 1 day in a thousand for down here, as the default weather is usually cloud and fog, so we figured we may as well enjoy it. Navigating was easy and we just rolled along. Though we knew we’d have another tricky section ahead, that being the Devils Ladder,

another 1st for me and Conall too I believe, and we’d be doing it in the dark for the last bit lower down. I’d heard so much about how eroded it is from all the environmental meetings I’d been to over the last few years, and it is bad. Not one I’d recommend for everyone and you definitely need balance and patience. you can’t rush this section, also making  sure not to knock rocks on to your pals below, and the guys above don’t knock em onto you, so keeping look out for shelter just in case could be a good idea. This evening there’d also be a river flowing down the ladder in places too due to recent heavy rainfall too no doubt.

It was full dark before we reached the bottom, but being well equipped with head torches it didn’t really slow us down that much I don’t think, then once back on the valley floor it was just a matter more or less of pointing ourselves in the direction of home, quick clean up, and head out for that piazza.

A day well spent in good company. Think I’ll be back. Some unanswered questions for this route.

2 thoughts on “The Big Gun, Kerry”