One of my favourite hill-walks in the Sligo area and a popular hike all round, is from Glencar Valley to the old Barytes mines. Come up here where the birds play on a sunny day and you’ll be glad you made the climb. You can drive up nearly all the way to the top from the old “bog road” as it’s known. This is how they get the turf down from the hills to warm the houses and cook the meals in the olden days. You can park up by the boat house and from there follow the only obvious road heading up through the trees, into the soaring heights above you.

Don’t go all the way to the top however, this road has a few hairpin bends to it and it’s at

the 4th or maybe the 5th, you’ll see a well-trodden path through the trees, heading in a westerly direction so take this and hop over the low wire fence it brings you to, climb a little more, still heading west now stop and take your breath and marvel at the sight that is the Glencar Valley in all its splendour.

You’re now heading out and will be travelling along the top of the escarpment and cliffs, be real careful here as in parts there’s nothing between you and a long drop to a sudden stop at the end. If you don’t have such a good head for heights but, not to worry as you can just stay well back from the edge.

Climb a bit then drop into a hanging valley and cross the 1st river by the old shepherds hut, heading west all the time and staying in touch with the top of the escarpment and cross the second river. This is the one that feeds the devils

chimney, and if there’s water in it and the wind’s blowing the right direction, you’ll be treated to a rare sight indeed, and possibly a soaking, depending on how adventurous you want to be. If there’s a lot of water in the river and a fast flow, just head up stream a little till you find somewhere narrow enough to cross. There’s plenty of spots

with stepping stones where it’ll be just a simple step to cross but bear in mind if you’re looking for the hard-rock café, if you travel upstream to cross you’ll want to come back down a bit and then keep h

eading west. You’ll clearly see south facing crags in front of you and your goal is to get up above these by way of the obvious nice gradual incline, but keeping to the top of this ridge as much as possible till it drops away again and you’re at the Hardrock.
Good spot to sit for a while and possibly if you’re not too big a group or if you’re quiet and who knows what you’ll see up here. Besides the ravens with their acrobatic displays I’ve also seen numerous mountain hares, badger, fox, peregrine and numerous other bird
species, and looking down to the lake and knowing that hundreds, probably thousands of

years ago there would have been someone on one of the crannogs in that lake looking up here to where I’m sitting and wondering what would have that person have been thinking.
But I digress, to get to the mines from here it’s northwest and cross the low wire fence and up through or alongside the usually dry gully in the corner, by the sheep pen and after you ascend from this gully onto a gradually rising expanse, still heading NW for 1500m will get
you to the old mines.
Here they dug for Baryte between the years 1858 – 1979 and in that time there were 6 separate companies running the place. All but one of these were foreign, and a lot of the infrastructure still remains in place but it’s seen better days as you can well imagine. Baryte has many uses in various industries from petro-chemical to
construction and medicine. 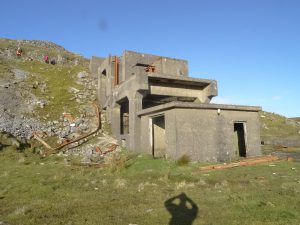 Operations ceased when it no longer became viable as the mine could no longer compete on the world stage for prices with the huge opencast mining operations in places like South America and other places where they’d just remove whole mountains with machines, so Glencarbury went belly up. But it’s a fascinating place and you can still see the workers’ hostel which was built to house the workers, the cross they’d pray at before heading into the depths and the pylons from the cable cars they used to transport the barium down to the valleys for processing and export.
And from here it’s just a matter of retracing your footsteps back to your where you started if this is your plan, however there’s a number of different
options open to you from here if you put the right plans in place at the start of the day.
I hope you enjoyed your hike to the mines and please get in touch with any feedback or questions you may have. It’s good to talk. All the best. N.